Turning dark and dreary into bright and breezy.

We had a dark and dreary hallway which desperately needed lightening up.  With a dark brown front door, small window alongside it, dark wood flooring and a long narrow landing it made for a pretty uninspiring space.  The stairwell offered a large picture window but all the light was getting lost in one area.  I don’t have much imagination so didn’t really know where to start but Calico Painter’s experience meant they listened, considered the options and gently advised us throughout the process.

They made us think about the bigger picture, how the hall linked to the porch and the light coming in from the stairwell but also how what we did with the stairs affected the landing which in turn fed onto the separate bedrooms and bathroom.  They enabled us to take a step back and broke the job down bit by bit so it felt manageable.

We have a dado rail running along the hall, stairs and landing which provided an opportunity to use two tones throughout, Rebecca had already used a lovely grey in our office at the end of the landing and we wanted a lighter shade without having boring magnolia.  She suggested a Johnstone’s French Grey which we loved, by pinning swatches to the wall we could see it at different times of day, with natural and spot lighting so we had a better idea what it would look like day and night.

Calico helped us every step of the way, suggesting white eggshell for the woodwork, a great contrast to the French Grey whilst also providing a clean edge either side of the stair runner we were planning.

We hadn’t finalized our decision on which stair runner design would best suit our “London fabric” blinds, when we discussed it with Rebecca she immediately chose the tread we’d been dithering over.
Likewise, with our front door, choosing the right colour seemed like a big decision because it’s the first thing you see.  We wanted blue but didn’t know what shade, with her experience Rebecca suggested “Little Greene’s Bone China” she already knew it worked well with the shades we had chosen indoors.
The hall floor wasn’t part of the original plan, however Rebecca suggested it would be simple, using her dustless sander, to remove the dark, dreadfully worn varnish and apply a few coats of dead flat varnish.  The boards look altogether lighter, giving the hall a “beachy” effect.
The finished look is stunning.  A much more welcoming entrance to a cleaner, brighter space. 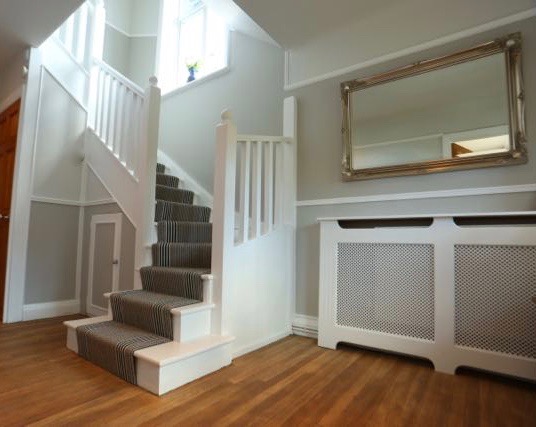 Everyone who has visited since has commented on how much fresher our porch, hall, stairs and landing look; “like a different house” one friend told me.  We’re thrilled with the results and would happily recommend Rebecca and her team of ladies.  Although ideally, I’d like to keep her a secret so she’s free to come back and do the rest of the house!